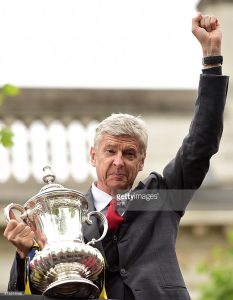 The FA Cup Final will feature two of modern English football’s top sides as Chelsea and Arsenal will play for silverware. The two sides have met just once previously in an FA Cup Final, which took place 15 years ago this May.

In fact, the two famous clubs have only ever met in two cup finals and both came after the millennium.

The Gunners have reached the FA Cup Final six times since 2000, and have lifted the old trophy on five of those occasions. Arsenal won it most recently in back-to-back seasons 2013-14 and 2015-16.

Despite the mounting pressure on Arsene Wenger to leave from fair-weather fans, the Frenchman has been able to add some silverware to the trophy cabinet.

Arsenal have won the FA Cup Final on 12 occasions and a 13th win will take them above last year’s winner Manchester United for the most all-time.

Arsenal are facing next season without Champions League football. Wenger has got his Gunners to finish in the top four in 20 straight seasons, but that run looks to be coming to an end.

While many see Chelsea as the new kids on the block due to Roman Abramovich’s takeover of the club in 2003, Chelsea have had a long and rich history in the FA Cup. The Blues are tied for fourth in all-time for FA Cup Final wins with seven alongside Liverpool and Aston Villa.

Since 2000, Chelsea have also competed in six FA Cup Finals, and like Arsenal, won five of those matches. Arsenal and Chelsea have dominated the competition between themselves, taking 10 total cups in the last 16 FA Cup tournaments.

This season Chelsea have been the best team in English football. Antonio Conte has breathed fresh life into the side and have the Blues on target for a domestic double. Chelsea can thank a lack of European football for being so strong, unlike Arsenal, who once again will fail to win the Champions League and Premier League titles.

Arsenal and Chelsea do have FA Cup Final history as the two teams played in the 2002 final. The Gunners did the double in 2002 as the team finished seven points above Liverpool.

For the final, Chelsea manager Claudio Ranieri sat John Terry due to illness, a shocking move despite the defender being passed fit on the day. Terry would come on in the second half, but his presence couldn’t stop Ray Parlour and Freddie Ljungberg from scoring and leading Arsenal to a 2-0 win.

The only other time the two sides have met in a cup final was during the English Football League’s 2006-07 tournament. The affair was fiery as both clubs were fined for fighting and poor conduct. Both teams paid out £100,000 to the FA in fines.

Unlike the FA Cup Final, Terry was in the Chelsea XI from the start, but left the game just after the hour mark. The captain was kicked in the head as he dove for a header. Knocked unconscious, Terry swallowed his tongue and needed immediate medical attention to save his life. Amazingly, Terry was on hand for the team’s celebrations following the cup win.

Arsenal’s Theo Walcott opened the scoring for the Gunners on 12 minutes in the final. But Didier Drogba, at the peak of his powers, stole the show. Drogba levelled the match on 20 minutes before giving Chelsea the cup six minutes from time.

The two sides meet for the second time in the FA Cup Final on May 27th in what should be a fiery affair at Wembley.