According to the Mirror, Manchester United have dropped Marcus Rashford and Jesse Lingard from their Champions League squad. Jose Mourinho’s exclusion of the two Manchester United academy graduates have sparked rumours of the club being ready to cash in on the pair come January. 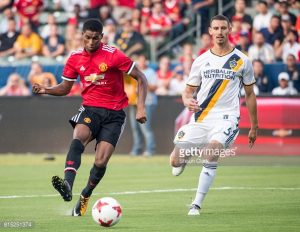 Manchester United’s 24-man Champions League squad may not have included Rashford or Lingard, but Mourinho did add Zlatan Ibrahimovic and James Wilson.

The shocking inclusion of Ibrahimovic comes as the Swede is still recovering from a devastating knee injury last spring. Meanwhile, Wilson has just come back from an injury of his own. With both Rashford and Lingard not included for the group stages it looks like their days could be numbered at Old Trafford.

Although many Manchester United fans have expressed worries over the two youngsters being omitted from the group stage squad, the club have had to hand UEFA two squad lists, which could explain their exclusion. According to the Mirror: “List A can contain a maximum of 25 players, two of whom should be keepers, but there must be no fewer than eight locally-trained players in their squad. List B is for players born after January 1 1996, which must be submitted no later than 24 hours before a match.”

Due to Manchester United needing two squad lists, it is believed Rashford and Lingard will be included in the second list that has not been made available as yet. Both will qualify for list B, and both would then play a part in the Champions League group stages.

The Red Devils kickoff the Champions League on September 12th against FC Basel at Old Trafford.

Manchester United are already being linked to a move for Antoine Griezmann, who could replace Rashford or Lingard on the left side of the team’s attack.