Liverpool suffered their second defeat in all competitions Tuesday night as the Reds were knocked out of the Carabao Cup by Leicester, 2-0. With the Reds unable to defend and winless in their last four games in all competition, speculation has grown over the job security of Liverpool manager Jurgen Klopp. 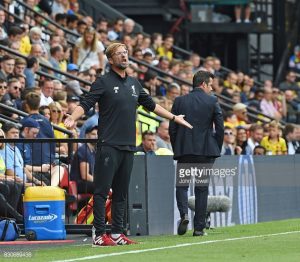 Earlier this week, Jurgen Klopp’s performance as Liverpool manager was called into question by pundit Alan Shearer. The former Newcastle legend wrote in his Sun column that Liverpool are no better under Klopp than when Brendan Rodgers was at the helm. Since penning those words, others have come out to criticise the German coach and his team. The Daily Star even put together a slideshow of managers with the same or better win percentage as Klopp. Currently, Klopp’s win percentage as Liverpool boss is 50%, the same as Rodgers and former Tottenham boss Tim Sherwood.

After Liverpool’s recent performances, Klopp has been listed at 33/1 by Sky Bet to be the next manager sacked in the Premier League; and there is no doubt a lot of pressure on the Liverpool manager right now. The team are not only under performing in attack, but the side are leaking goals at the back. The defence was an area that Liverpool did not address in the offseason, and Klopp has been happy to re-install the often maligned Alberto Moreno back in at left-back. However, the problem with Liverpool’s defence hasn’t been solely down to Moreno, as centre-backs Dejan Lovren, Joel Matip and Ragnar Klavan have been guilty of mistakes.

Hot, young prospect Trent Alexander-Arnold started the season so well for the club at right-back. However, he proved to be a liability against Manchester City well before Sadio Mane’s sending off.

Liverpool are currently five points back of league leaders Manchester United. Those five points seem like a much larger gulf than they are in reality. Being knocked out of the Carabao Cup may be a blessing in disguise for the Reds, however. The team are now playing in just three competitions as opposed to four.

Although a majority of Liverpool supporters are behind Klopp, there is a growing number of fans that have grown tired of the Reds under the German. Klopp has only been in charge of Liverpool for one full season, and he was able to get the club back into the Champions League during that term. It appears the Liverpool board has no intentions of parting ways with Klopp, and see him as the way forward for the club, for now.

What are your thoughts on Liverpool and Jurgen Klopp? Join the discussion.