Arsene Wenger has admitted Arsenal may be forced to sell Mesut Ozil and Alexis Sanchez in January. The club are negotiating with Ozil currently, but he could still leave despite the progressing contract talks. Sanchez, on the other hand, has reaffirmed his desire to leave the club. 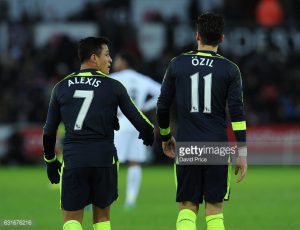 Due to the uncertainty over the two playmakers, Arsenal may sell both in January. The players will see their current deals expire in July 2018, and both could walk away for free.

The Gunners were close to selling Sanchez during the summer transfer window. However, the team were unable to land replacement Thomas Lemar from Monaco. Without Lemar taking his place, Arsenal were unwilling to let the Chilean leave for Manchester City.

Wenger was recently asked about Ozil’s current contract negotiations, and according to reports, it is going “positively”.

“That is my understanding,” Wenger stated. “The fact we didn’t agree last year doesn’t mean he wants to leave.

“Both players look happy and overall I hope the situation can be turned round, but at the moment we are not close enough to announce anything. Talks are going well.”

After a poor start, Arsenal are undefeated in their last four fixtures, and could yet turn around their Premier League campaign. Arsenal are also playing in the Europa League. Thus far, the team have performed well.

Neither Ozil nor Sanchez have scored a goal in the Premier League this season. Sanchez has recorded an assist, however.