Manchester United super fan and sprinting legend Usain Bolt has stated he will pursue a football career, but he will be realistic about his chances. The Olympic gold medallist has been a football fan since his youth. He hopes to make a move into the world of professional football now that his sprinting career has finished. 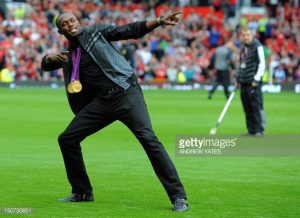 Bolt to trial with Borussia Dortmund

Bolt has been invited to trial with German giants Borussia Dortmund. It was speculated he could be given a trial with Manchester United due to his support of the club. However, an invitation from Jose Mourinho hasn’t been forthcoming.

While Bolt has been invited to trial with Borussia Dortmund, he hasn’t participated in a trial due to a lingering hamstring injury.

Bolt is honest with himself

Despite his love of the game and desire to play professionally, Bolt is not kidding himself about the likelihood of gaining a professional contract.

When asked about his hamstring injury, Bolt told reports he would be back soon.

“My hamstring is just keeping back right now, in two weeks I can train again and get back to some shape, then I can really explore that situation,” Bolt said.

“They said the invitation is always open, so it is all about me getting over my injury and into shape. Then I can explore it and do the trials and see what level I am at.

“For me it’s just to try to see if I really can be one of the best, anything I am doing, I’ll try to do it at my best.”

Bolt also stated he is not optimistic about getting an offer from Manchester United.

“It would be difficult to convince [Jose] Mourinho, but we never know, it’s something I said to Alex Ferguson the other day when I was there,” Bolt said.

The recently retired sprinter hopes to gain a professional contract with a football club. Some have stated he could already play for League One or Two sides in England.