Barcelona desperately want to get rid of Philippe Coutinho following his subpar 2018-19 season. Coutinho’s five goals and two assists in La Liga last term have influenced Barcelona to throw in the towel on the Brazilian.

Their desire to usher Coutinho toward the exit comes just 18 months after paying Liverpool £130.5 million for his services. Barcelona’s decision to give up on Coutinho shows the short-term thinking used by football clubs. Yesterday’s must-have football star is today’s football outcast.

Both Arsenal and Tottenham Hotspur are linked with Coutinho. The Mirror claim Spurs have already made a bid for the playmaker.

Arsenal have already signed Nicolas Pepe this summer but the Gunners still need defensive reinforcements rather than another attacking player. Yet, reports of a desire to land Coutinho abound.

The Problem with a Philippe Coutinho loan

A loan for Coutinho would still cost either Arsenal or Tottenham Hotspur a large chunk of money. Barcelona want a loan transfer fee in the region of £21m to £27m. It is a fee that is ridiculous to pay to essentially borrow Coutinho for one season.

Add in Coutinho’s £200,000-a-week salary and the move for him seems even more ridiculous. If Coutinho ended up at Tottenham Hotspur, he would immediately become the club’s highest-paid player.

Alexis Sanchez’s salary upset the wage structure at Manchester United and a deal for Coutinho could do the very same for Tottenham Hotspur.

Philippe Coutinho by the numbers

The Brazilian scored just five goals and added two assists last term. It was a season in which he came off of playing at the World Cup with Brazil where Coutinho excelled.

While Coutinho didn’t meet his expected goals or expected assists last season (7.84xG and 4.12 xA), he did the previous season. Coutinho only played half a term with Barcelona in 2017-18. He scored eight goals and tallied five assists in his debut Barcelona season. Those totals exceeded his xG and xA numbers. 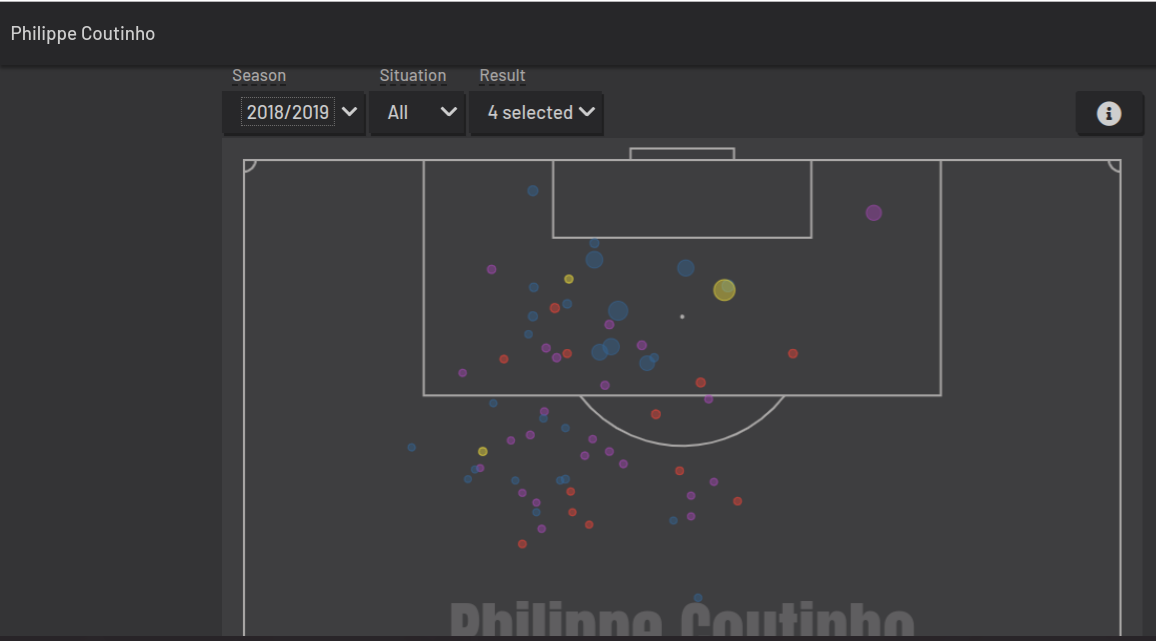 All of Coutinho’s goals in 2018-19 sans one came in the 18-yard box. For so long, Coutinho was considered a master of long-range shots, but just one was scored last term. He was poor from long-range yet continued to fire from outside the penalty area.

Would Philippe Coutinho fit in at Arsenal or Tottenham Hotspur?

It is difficult to believe Coutinho would fit in at Arsenal. Mesut Ozil has been marginalised for his play in Unai Emery’s tactical system. Coutinho’s defensive duties are lacking. Even in Liverpool’s pressing defence, Coutinho lacked the work ethic his teammates had. If Ozil lacks a strong defensive work-rate, then why would Coutinho possess one?

The same goes for Tottenham Hotspur, although Mauricio Pochettino’s side doesn’t press like Emery wants his team to. Pochettino could use Coutinho in his midfield three but he would play a similar role to Christian Eriksen.

Barca shipping Coutinho to any prem club that will take him pic.twitter.com/h7y5UgHcKI

Eriksen is linked with a move away from the club. That includes a transfer to Manchester United, but it is doubtful a deal can be made in two days.

Spurs fans going through all their old 'Eriksen > Coutinho' tweets from two years ago like: pic.twitter.com/sd2mhTRGhP

Coutinho’s move away from Barcelona seems unlikely if he is moving to a Premier League club. Even a move to fellow European team seems far-fetched if Barcelona want over £20m for a one-year loan.