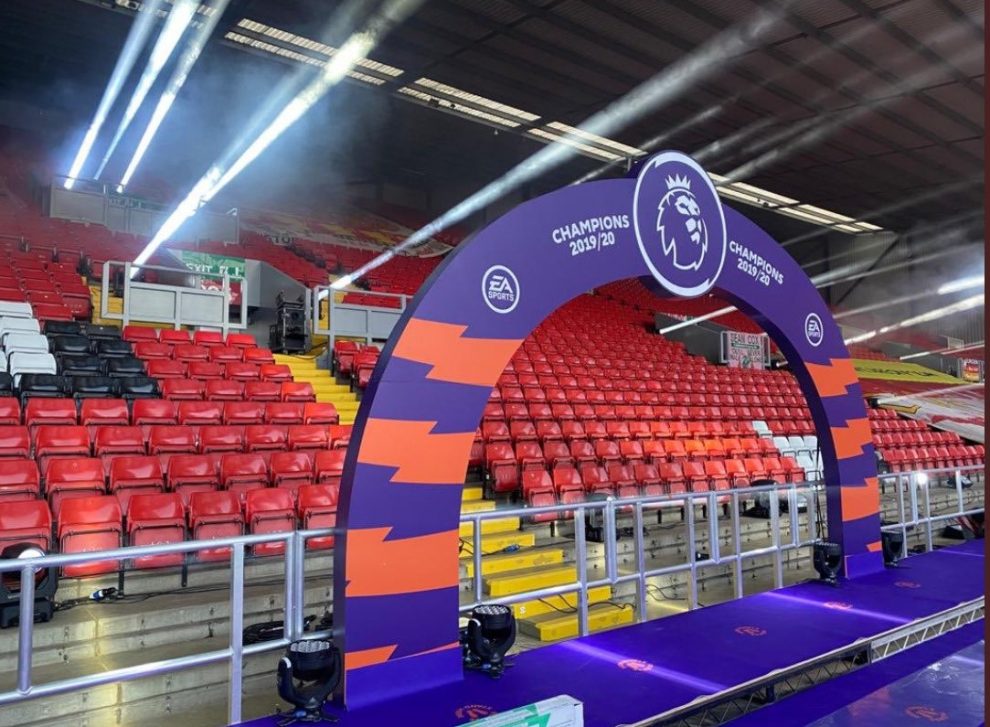 Liverpool will be officially crowned Premier League champions when they are presented with the trophy after tomorrow evening’s encounter with Chelsea at Anfield.

The Reds, who have have had an outstanding season, will take the top tier title for the first time in the past 30 seasons, and the 19th time in all.

Liverpool bosses have reputedly spent a million pounds to build a spectacular podium in the fabled Kop stand for the presentation. The occasion will also be marked by a giant fireworks display, which will be visible across much of Liverpool.

With thousands of fans expected to congregate outside Anfield, both CEO, Peter Moore and Captain, Jordan Henderson have put appeals out for fans to celebrate safely at home.  In a poll, conducted by our sister Twitter channel; @ChantLFC, 11% of close to 1,000 respondents said they intended to go to Anfield for the post match festivities.

Henderson, who remains injured and unable to play, will pick up the trophy for the Champions, with club legend Kenny Dalglish also involved in the presentation.

Jurgen Klopp is expected to start with a strong lineup against the London club, who are still fighting with Leicester City and Manchester United for two of the remaining three Champions League places.

Our predicted Reds lineup is as follows:  Alisson, Alexander-Arnold, Robertson, Gomez, van Dijk, Fabinho, Keita, Wijnaldum, Firmino, Salah, Mane.  Youngsters, Curtis Jones, Neco Williams and Harvey Elliott can expect to be on the bench for the final Anfield fixture of the successful 2019/20 season.

Liverpool’s record breaking season will conclude with a visit to Newcastle United on Sunday.