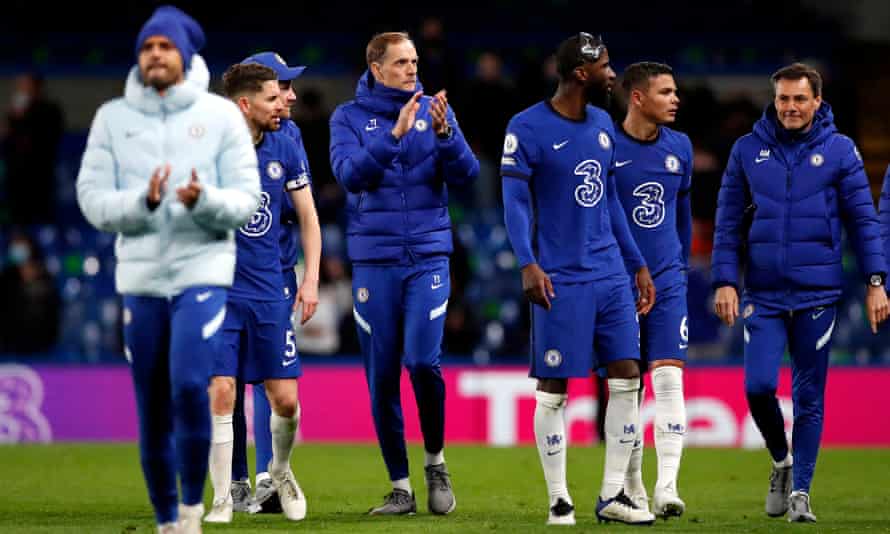 Chelsea’s 2-1 over Leicester City last night ensures that the Premier League race for Champions League qualification will go down to the final weekend of the season.

Stamford Bridge served up a pulsating game of football for returning Chelsea fans, with the Blues in top form, avenging their FA Cup final defeat to the same opponents, three days earlier.

Chelsea had all of the play in the first half and could have been two or three up at half time, with Timo Werner guilty of of failing to convert chances on a number of occasions. There is not question the German international works hard for his team, but Chelsea boss Thomas Tuchel must be asking himself whether Werner has the calm to hit the ground running in their next campaign.

As it was, it took a headed finish by Antonio Rudiger (47′) early in the second half to break the deadlock, to the relief of all of those inside Stamford Bridge. Rudiger has taken his opportunity well under Tuchel and his re-emergence as a first teamer is just one of the benefits that Chelsea have enjoyed under Tuchel.

Jorginho put the Blues two up with a penalty (66′), following a foul on Werner. The fact that the Italian player’s 7th conversion from the spot has made him his team’s leading scorer in the Premier League just underlines the challenge that Tuchel faces when putting together his wish list of squad additions. A list that must include Harry Kane, now that the Spurs lynchpin has come out stating his intentions to move in summer.

Chelsea were good in this game, and Leicester City poor. But the Londoners still allowed their top 4 rivals back into the game when sub Kelechi Iheanacho pulled a goal back on 75′. Iheanacho added pace and directness to Leicester’s attack and the Foxes could well have stolen a point when Ayoze Perez blazed over with the goal at his mercy in added time.

So where does this leave the race for the top four?

Well Chelsea sit in 3rd, a point ahead of Leicester and four ahead of Liverpool, who play their game in hand at Turf Moor this evening. Leicester are a point back, meaning any Liverpool win this evening would see the Reds overtake Leicester on goal difference with all three teams facing final fixtures on Sunday. Chelsea go to a spirited Aston Villa knowing their work is not yet done. Leicester face a Spurs side, fighting for a Europa League spot – with Kane fighting for the Golden Boot in potentially his final match in a Spurs shirt. Liverpool – assuming they win at Burnley, would face Roy Hodgson’s Crystal Palace at Anfield, in the Eagles Manager’s final match in charge.

We’re putting our fantasy dollars on Chelsea and Liverpool taking the two spots, with Leicester falling just short – as they did last season. While disappointing for Rodgers and his team, the Leicester faithful will console themselves with an FA Cup win and another assault on the Premier League in 2021/22.